Some of those pics are old my collection is larger now.

As an added bonus my semi accurate Ghostbusters Costume.

Does anyone else have any pics of their collection?
I do know everything just not all at once its a virtual memory problem.
Top

i'd upload pictures of mine now, but my card reader is being a giant DOUCHE. so here's an old picture that doesn't have all of my stuff in the picture. keep in mind that i just began collecting for not even half a year.

missing are my DDR dance mats. i have about five in all. but only two in my dorm room. my xbox controllers. i have five as well. including "the duke". my n64 "purse" that triton wants to buy from me but will never get. and my top loader NES. and a bunch of random atari 2600 games.
Top

I used to have just about every system until I had to sell everything for rent money.

I just recently made a new shelf so some of my stuff is still boxed up/scattered all over the place. That said, the only thing more sloppy then my room is my camera work.

small blurry console pictures. the blob of black there under the blue game gear is a turbografx16 and a master system.

NES Tower! Not including the boxed system or a shell I have laying around somewhere.

a mess of tangled controllers

lynx box. dunno why i took a photo of this, damn thing doesnt even work i want to play portable qix aarrrrgh

most of my loose games are still somewhere, a few homeless genesis games, turbografx cards and some TI-99 goodness but this should give you a good idea of my collection.

Add a warning in the title.
Top

is that an NES famicom clone controller i see?
Top

2 Sealed copies of Dynasty Wariors for GBA? Why?

I was givin' that game for free from a classmate, sold it because it sucked badly, and I was surprised I got $7 out of it.
Top

shadowhacker, Is that a Vtech Socrates I see in your first picture

. I have one and their fun to play when there is nothing else to do. Even tho their a Educational game system. I have 2 game cartridges and the voice cartridge for mine. Do you have the Voice Cartridge for your socrates?

Anyways I post pictures of my collection in a day or so.

ill post pics if i ever get my room clean, samus can vouch that i do infact have all that crap lol
Visit us at Portablesofdoom.org
Top

it's like heaven in a room. it's indescribable.
Top

Edit: whoops pictures are huge I'll put up others later.

http://bicostp.portablesofdoom.org/gall ... itemId=108
Lots of collection pics from this summer, taken against an old drop cloth I found in the garage propped up on the couch.

Not pictured:
- A bunch of PSX games (25-30 or so, collected over the last 10 years)
- Some PS2 titles (GT3, GT4, the first Cash game, Starsky & Hutch, Stuntman, Burnout, Simpsons Hit & Run, NASCAR 2005, Crazy Taxi, Tourist Trophy)
- A bunch of random Macs and associated hard drives, cables, connectors, and adapters
- Old pamphlets and ads
- NES, PSX, PS2, and Genesis because they're nothing special, just run of the mill consoles.
- Miscellaneous PSX crap (cables, adapters, 2 PSones, controllers, steering wheels)
- Flashback 2
- Flashback 1
Radio Shack Hummer C64OAC thingy with a keyboard connector hacked on
- 2 TI 99/4as with RS-232 interface, dot matrix printer, a couple tape cables, keyboard shortcut blanks, manuals, a book of really long BASIC programs for it (which sucks because every time you want a program you have to type it) and obligatory 1" binder with hand-written and dot-matrix printed BASIC programs.
- Intellivision with a handful of games. (Doesn't work.)
- Box full of Atari cables, adapters, and controllers. (There must be about 6 sets of paddles in there...)
Twitter
http://www.pcwgaming.com" onclick="window.open(this.href);return false;
If you want a Dropbox account, please use my referral link
Top

pics of the bulk of my collection! sorry for the mediocre quality lol 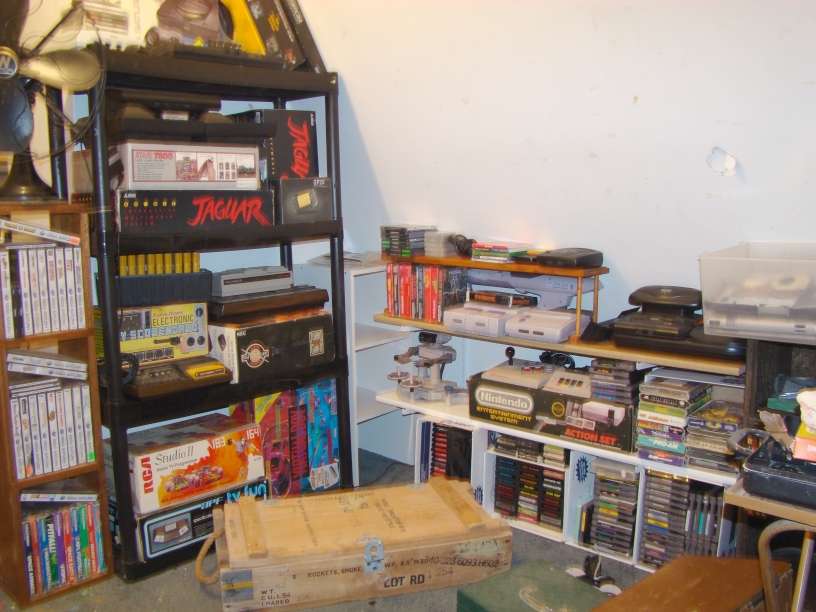 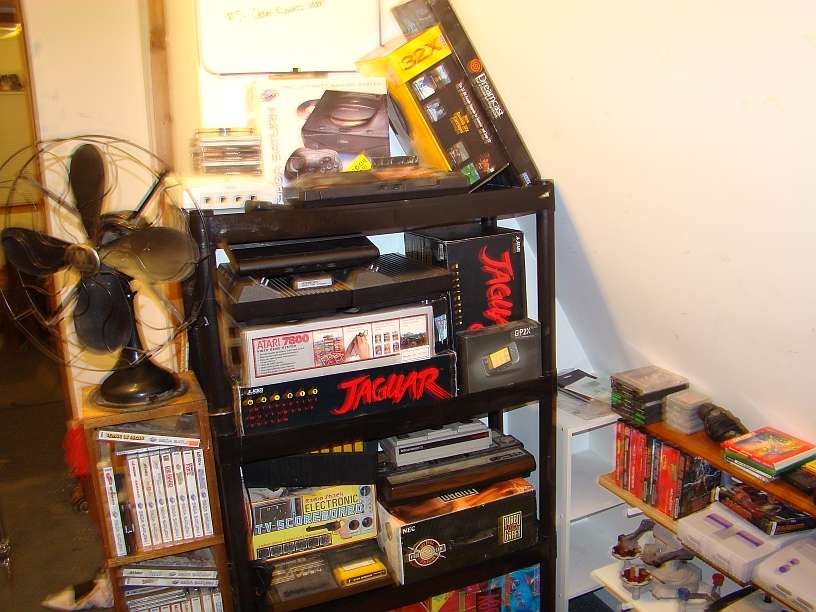 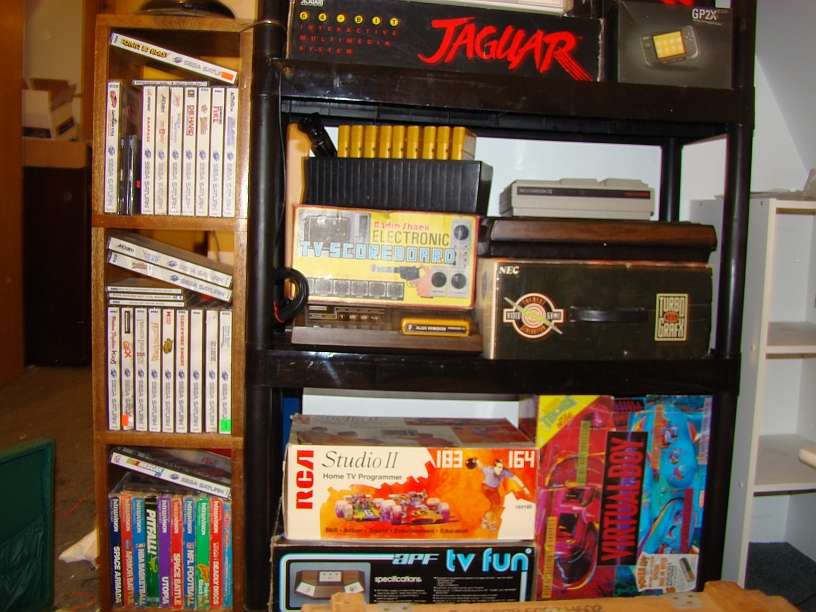 on this next pic the 3 rows to the right there are no duplicates, the small row is my duplicate games and a cleaning cart 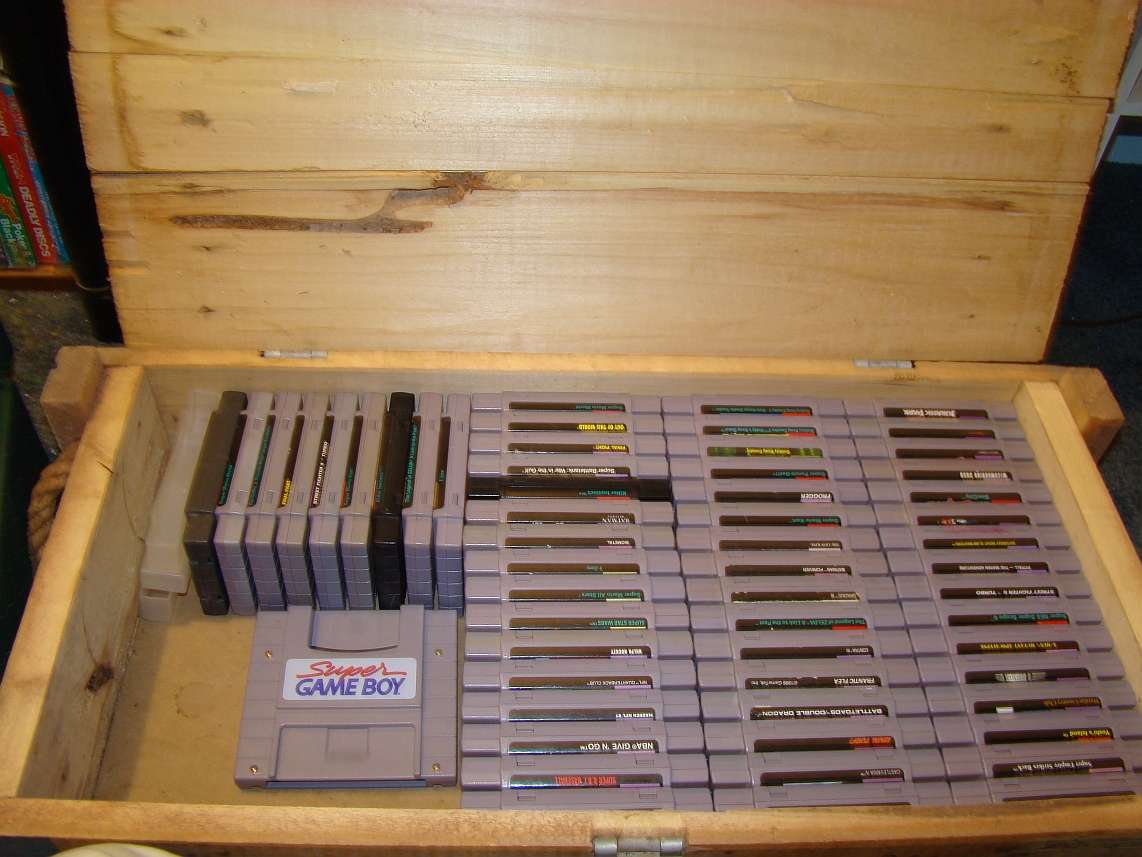 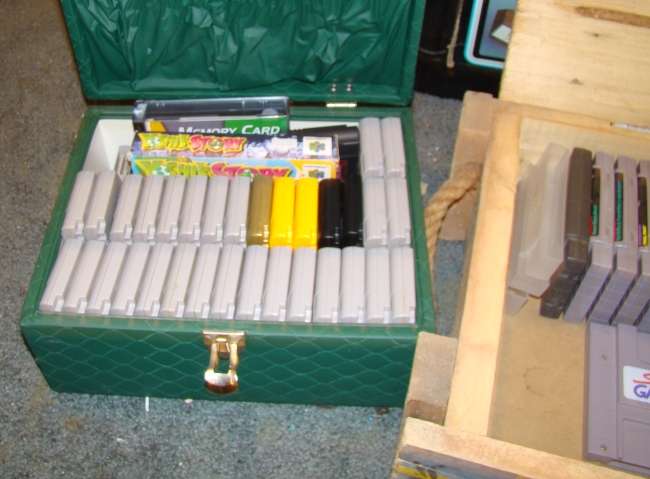 and this is not all of my collection! not included are a few of my systems, any of my duplicate systems, my classic computer collection and probably more than a few of my games!
Visit us at Portablesofdoom.org
Top

I'd be embarassed to show my measly collection here. I'll just ogle you guys'

I don't want to make an "I'm leaving" thread, but I've sort of lost interest in this board. So if you notice that I'm gone, that's why.
Top

My collection consists of an Xbox 360 and about 6 games.