Discuss LEGAL mods for your game systems, and turning them into portables!

Awesome 'shop. It really does look cool with 4 joysticks.

Mario wrote:Replace the ABXY buttons with a joystick as well!

A bit overkill, but I can't say I wouldn't want that...
My League Of Legends Referral Link. If you like DOTA, sign up with my link, try the game, and help me out!
Top

Might as well throw in a 5th one to do the shoulder buttons.

not to mention the three middle buttons

I'm trying to wrap my head around a quad analog experience. insane. lol
It takes a big man to cry, but it takes a bigger man to laugh at that man.

Hmmm, quad analog, maybe I'll shop a DualShock into a QuadShock, but that's way harder. All I did for this one was take the side with 2 sticks, flip it, and put it on the other side. Making a quadshock would mean I would have to cut out the sticks and paste them on, and do a LOT of patching.
Wordpress Blog/Site YAP64/2 YAP64 (dead)

If you really don't want the guide button, it would look a little like this. But that's just crazy! Or is it?

Someone shop a bunch of sticks on top of each other. Totem controller 360!
GET FREE WOW GOLD SEX VISIT MODRETRO

I can see it now, the analog bumper and trigger sticks. MMMMM.

EDIT: You COULD consolidate a trigger and a bumper to ONE stick on each side, but that would be too simple.
My League Of Legends Referral Link. If you like DOTA, sign up with my link, try the game, and help me out!
Top 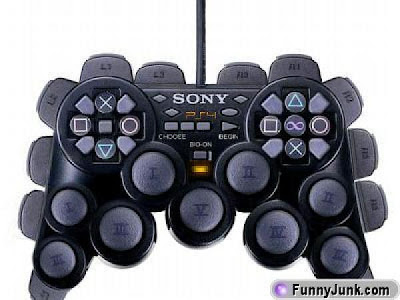 This reminds me of something I heard on the radio a while back. They were saying if a koala could play halo, it would own everyone because they have two thumbs on each hand/paw. They could jump, shoot and move all at once.
If you're getting 404'd when trying to use the links in stickies, try this tutorial to find that juicy info.
Top

Here is my matching faceplate for my controller.

Wow, I never realized that the 360 is that much bigger than the wii. (Although, it has been forever since I've played one

)
Banned indefinitely if you desperately need to contact me STOPPHONESPAMPLOX Please dont be a dick and call for something random like "HEY YURDRUE DOO U HAZ SPAM?"

Yeah, it really is.