Trying to get homebrew running on your PSP? Want to add a screen light to your Game Boy? Trying to figure out how to work your GP2X? By popular demand, discuss it in here! (This forum is for pre-built handhelds, NOT custom made portables!)

So my niece is 5 years old and she's already into video games. I gave her my old Xbox and she plays it all the time. I wanted to get her a portable game system so she would have something to play while she's away from home, but I thought that she might be a little too young for a DS or PSP. Instead, I got her this portable Genesis. It's pretty cool. It's really small so it's the perfect size for her. The screen quality is pretty good and it has 20 built in games so she doesn't have to mess with cartridges or anything. The only bad thing is that there are only a few good games on it and the rest are pretty meh, so I was wondering if there is anyway to hack it to swap out some of the games for better ones. I don't have the technical knowledge to figure it out myself, but I'm pretty good at following directions, so if anybody knows of a way, let me know. I'd appreciate it. Thanks in advance. 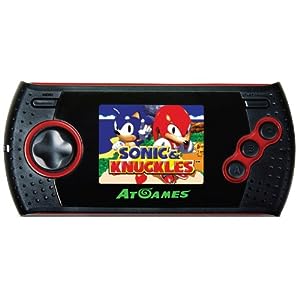 I know this is probably not what you are looking for, but if you don't have the tools and most importantly the experience you are better off buying some thing like this http://www.amazon.com/Officially-Licens ... 839&sr=8-2 And saving yourself the money if you accidentally wreck the first one in the process of trying to mod it.

The link I just gave you is to a Sega genesis portable with a cartridge slot as well as 20 built in games, it is also compatable with Megadrive games, as it says in the description, hope this helped.

Thanks for the suggestion, but I really want to mod this system. It was pretty cheap, so if I ruin it, it's no big deal. I may look into that product if I can't get anywhere with this one. Anyway, I do have some more information about the portable Genesis that I'm working on. I took it apart and found out what kind of flash memory it uses. It's made by a company called Spansion. It appears that the product number was intentionally scratched out. Probably a good sign that the system may be easy to hack if they don't want you to know the exact flash chip it's using. The only number that is visible is 0449CVA A, but I couldn't find that anywhere on the site. Does anybody have any ideas or knowledge working with Spansion chips that might help me?
Top

Can you post a picture, and determine which pins are VCC/GND?

There's a standard pinout for flash/ROMs - though it seems each brand likes to put their own twist on it.
Top

The chip is so small, I don't think that I have a camera small enough to take an adequate picture of it. I think I may have figured out which chip it is though. I was able to make out the first two characters of the product number. They are "S9" and Spansion only shows 1 chip that starts with "S9" and it's this one.

I may end up abandoning this project, though, because it says the capacity for that chip is 64mbit, which really isn't enough to put very many of the games on it that I want. Also, it doesn't list any higher capacity chips that would be a good replacement. Looks like the chip also contains the ram for the system, so an alternate chip would have to have that as well, but if anyone can find a different chip that might work and can tell me how to read/write to it, I might still give it a go.
Top

It looks to be a RAM and ROM sharing one package and data/address bus w/ diffent enable pins.
It is possible to disable one or the other, however some modificaition to the loader would be necessary if you were to replace the memory with some with higher capacity (larger page sizes).

While it is possible to make an adapter for this chip, the fact that there are 88 pins in an area less than 1 cm² kind of prohibits this without specailized equipment.

Well that's a real dealbreaker if the chip is only 32Mb like you have calculated. I estimate that I need at least 256Mb. It appears that I have been stymied, but thanks for your help.
Top

oops, I misread the datasheet;

Still, 112M is inadequate to your aims, and with the amount of hacking needed it would make more sense to make a memory mapper.

I lack the specific knowledge to help with reprogramming this handheld to use a mapper, though I'd be happy to help with the HW design. THough the issue of running 88 wires to the pads of this chip is a bit daunting.
Top

I was browsing to try and find the old cart hack for the game gear when I found this.
Top
Post Reply
9 posts • Page 1 of 1