Yes it is nice to be able to put your projects INSIDE something isn't it? You know, to hold everything together so it doesn't flop around? Discuss the techniques here!

I'd love to help and i have the abilities to. you should take an old POS tower and remove the inner frame from that you can cut and weld it to make the entire chassis smaller but the point is you have the mounting of the hard drives and disc drives and mobo n everything. you can completely remove the cooling aspects as your going to need a custom solution which i'd suggest a custom water cooling that is overbuilt as to add a little bit of security to the water cooling (even tho u dont use water you use a non conductive oil made for cooling whilst not ruining anything if there is a leek)

in all honesty i have a fully loaded alienware m17x and i run Crysis at Very High Graphics beautifully... and on that one "world" or watever you call it in world of warcraft (i dont play but it came preloaded so my friend wanted to test and benchmark my fps) there is some world that most people only get 5 fps and thats with very nice rigs... im running like 37 sooo i mean 4 gigs of gpu ram 8 gigs of ram overclocked to 3.3 ghz processor im set... ur gunna be spending 3grand but that will last you a year and a half and upgrading is real easy all from the bottom of the computer you can easily take it apart. and btw you get a 17 HD monitor...
Top

Meh I don't have anything near that amount of money to spend on mobile desktop PC...

Would anyone like to go ahead with this mod project?
Top

Ive had some ideas for a luggable computer for a long time, but at present i dont have the time, equipment nor inclination to do anything with said ideas

I hope I'm not reviving a dead thread...it's only a month old though, so I'll chance it.

Why not have the lcd mounted into the side of the case, like a tablet? you could have a cover that removes, with the keyboard mounted into it, and a possible touchpad/mouse or even a touchscreen! however, touchscreens aren't that great for gaming, so you could have a special compartment for a wireless mouse. Making it correctly could mean even using an existing case with it fitting onto the side!

P.S. Liquid cooling really is the way to go, as it is much more effective and easier to make watertight. Don't worry, it uses ethylene glycol (antifreeze), not water, so very little worry for a short if there are any leaks.

I hope it helps!
Top

Yea this thread is old, as is my quest to portable'ize my desktop...

Thanks for the suggestions Willrandship. If it ends up meeting the criterions (sturdy, somewhat rain-proof, acceptable through security, quick deployment and upgradability etc) then sure it can be done any way you'd like. I just dont have the correct tools and know-how to do it myself.

So, I hereby call out to the void once more; anyone up to this kinda project?

Im definitely up for your design challenge. It would be easier if you email me schima@rpi.edu

kingIZZZY wrote:Hey there guys!
Hope someone here can help with this.

I travel around a lot + I need my high-end desktop PC with me (+ i upgrade my hardware every once in a while)
= I need a case-mod solution to make my desktop PC portable.

No, not battery powered

The idea is it should remain as upgradable as any regular l33t rig (all hardware components easily replacable by unscrewing/rescrewing stuff), and yet portable (and as durable as possible) enough to carry over airplane flights and to LAN parties etc.

A case mod that would end up looking something like this 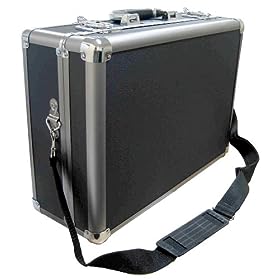 So I went ahead and tried to do it myself. I planned it out with Google Sketchup

Then I went and bought that Zeikos case from amazon, a Envision G19LWK which i stripped down to the core, a PEXP16-RX2 riser card, and tried putting it all together with my PC hardware.

To make a (very) long story short, I did successfully fly and travel around with it several times (don't ask what happenes at security

But- it was an ugly mess.

Things were'nt holding in place, both deployment and packing-up was taking way too long, PSU wires were strewn all over, the system would mysteriously refuse to power-up... it was a real pain to utilize. I realized that if i dont do this professionally its not gonna serve my purpose.

What do you guys suggest? Can any of you modding gurus make a case mod like this for me? I dont really have too much to spend but I really need this kind of mod... I wouldn't mind doing all the planning and sketching and acquiring the materials etc. So long as it ends up as i need it.

Here are the fundamental features i need;
Size & Dimensions
The mod should accomodate the following hardware: More boring details:

- I always unpack/deploy on a desk. It would be awesome to figure out some mechanism to easily and quicly remove the LCD screen (with its custom cables already connected to the case's gpu/power) out of the case and set it up on a stand of its own (see 3rd pic) and then quickly packing it back into the case when done. Because otherwise, using this case-mod as a laptop (as in 2nd image) - literally atop your laps - would be extremely inconvenient.
- It would be great if we could fit a keyboard/mouse/headset into the case and easily unpack it during deployment and pack it back into the case when done. Otherwise i'd just carry these in a seperate bag or something (which defies the whole purpose here a bit, besides for increasing deployment time to plug/unplug them). Integrating these items directly into the case would once again be quite inconvenient for desktop usage.
- Because of the rain-proof factor, it would be awesome to have covers for the external openings (like the DVD tray / USB ports / all other I/O ports) much like a cellphone battery cover.

It was a monster!

I was just playing around, and wanted to take my home pc to college...

It was a real learning experience...

The whole project took 6 hours with a buddy of mine...

this thread is old
Top

What is this I don't even.
Top

The LCD is permanently made part of the "cover" half of the case, with its necessary expandable cables already attached to the GPU and power connection, plus an unfoldable stand embedded inside. Now, upon deployment, I completely detach the LCD half from the rest of the case and set it up, leaving the whole rest of the case open for ventillation.buy cialis online
Last edited by mindex on Mon Jan 16, 2012 5:24 am, edited 2 times in total.
Top

If you used the tower of a Dell Dimension 8200, it could work nicely. Those towers were clam shell design, and damned if they aren't durable.

You could easily mod that tower for a case, they were modular inside, you can put any mother board in the damn thing, with no need to do heavy work, and if it's a small enough board, you could then attach the bays next to the MB and voila.

With size and weight not being too much of a factor, you could also use a multitap outlet to plug the LCD and tower power into, then use a short extension cable on a retracting wheel to plug into the wall outlet to work it.

Using the above bit, if you use a 3 way multi-tap, you could put a regular fan (one of the mini ones) mounted to the interior of the case, which would work much better for cooling than a CPU fan(use both if you see fit). I've used regular fans to cool my desktops, and laptops/netbooks, they work much better than the USB "chill mat" or "cooling fan".

Using this case, you could install a plate over the board and guts at a diagonal slant, to allow for a full LCD monitor to be attached on the upper portion of the case, which with extra cables could allow for USB ports to be mounted under the LCD screen for easy access, and such.

Yes, I realize it's a bit more involved than that, but just for the basis of it this would be sound.

Also, yes, I realize you'd have to seal the tower's original bays and such, but it can be done.
~_+_~WhEn ThE sUn FoUnD tHe MoOn, ShE wAs DrInKiNg TeA iN a GaRdEn, UnDeR tHe GrEeN uMbReLlA tReEs In ThE mIdDlE oF sUmMeR~_+_~